It is a light-weight FM implementation for your C64! This adds 9 FM sound channels to your Commodore. See the Showcase below for examples! FM+SID is a reality!

The cartridge as of Batch 3 with IComp cases and box: 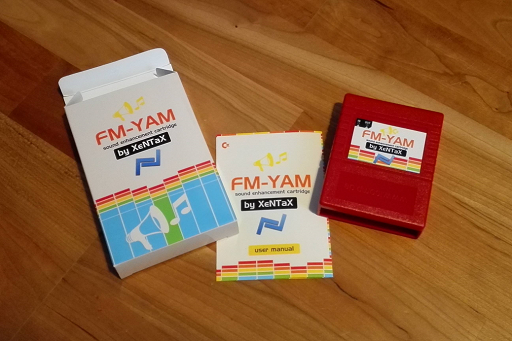 The first , second, third and fourth batch have (almost) sold out (360 units).

* Rollin' With Da Mouse - Mibri's entry for the Other Music compo at Gubb data 2022 done with DIGI-ORGANIZER 3.

* Greatness is a Vision - Mr.Mouse's entry for the Other Music compo at Gubb data 2022 done with DIGI-ORGANIZER 3.

* DIGI-ORGANIZER 3 - Tutorial for the latest version of the tool to add SID or FM-YAM digis to SID music.

* TTD Jazz Jukebox - The FM OST from the game!

Though it is based on the SFX Sound Expander by Commodore, it is less bulky and fits almost a standard C64 cartridge case. See the Vesalia type cases (e.g. RetroReplay, MMC Replay) and you will get a hint of the size. Furthermore, it has an audio in mini-jack, and and audio out mini-jack. As of Batch 3 sturdy IComp cases are used.

Yes it does! As of the latest U64 firmware (November 2020), you have need to make sure to set the IO2 to "External" to make sure the IO2 line really goes to the cartridge. In addition, DMA loading of programs will load a virtual cartridge and block IO2 from going to the cartridge. Just mount a disk with the FM-YAM program to run and load it normally, you can even do that with an Action Replay cartridge selected in U64(Elite).

12. What pricetag does it have?